It gives us immense pleasure to invite you all to celebrate and be a part of our 7th year Holika Dahan celebrations on Wednesday 20th March 2019 at the garbage disposal area behind the car park from 7.15 pm to 9 pm.

We will have the Holika Dahan prayer, a short play of color (Shagun only not a immense Color play) ending with a small token of love for all.

Looking forward to celebrating the Festival of Colours and joy with all of you.

This Whatsapp message on the White Water Family(WWF) group brought a broad smile to my face and took me back to March 2013. “Wow, it’s already 7 years to the first Holi ….”

Ever since we moved out of White Water Condo in 2015, I have missed so many such occasions…. Either we were traveling, or something or the other kept me away from WWF…So this time around, I didn’t want to give it a miss and decided to attend the event.

I love to be a part of any event that celebrates our tradition and culture. Be it from any state of India. I just adore the whole vibrant, colourful atmosphere a Hindu festival provides. I am even more amazed when I learn the power of Sanskrit shlokas and the scientific reasoning behind our sacred rituals. I strongly feel that this treasure trove has to be passed on to the next generations. Such celebrations provide the perfect ambience for knowing our heritage in a fun way. Not only that, such events create a feeling of bonding, brotherhood, and oneness.

WWF is one such friend’s group that celebrates all the festivals with enthusiasm and gusto. It’s like one big family with each member taking care of one task and creating a great event. I vividly remember how it all began and took shape.

There were hardly 6 to 7 Indian families in White water in 2013. We “The Kiasu Moms” (a Chinese term often used for over-anxious FOMOS moms) with our kiddos in tow used to meet near the tennis court at sundown. The kids used to have a gala time with free play, and we “Moms” used to breathe some fresh air with a cup of tea and lots of gup shup…

It all started one such evening when we were discussing and missing the festivals back home. And how something needs to be done to pep up our otherwise mundane routine. All over Singapore, there are events organized for Ranga Panchami, the second day of Holi celebrated by playing with colours. But nothing much happens for Holika Dahan in most Condos. Hence we decided to have a proper Holika Dahan and drew out a loose plan.

“Are we all together in this, girls?…. Can or Not ?” Demanded someone when we were dispersing after our meeting, followed by a mandatory prayer wishing for clear skies. Any open-air event in Singapore is always at the mercy of whimsical tropical clouds.

“Can…Can” we all roared to give our approval and participation.

So, just about four days before the actual Holi, this charged up “Gang of White Water” decided to start the preparation. First was the permission from the condo management office for Hindu Bonfire Festival…Hey Ram…Holika Dahan ka yah namakaran.

Once that was obtained, our squad of ladies set out to Pasir Ris Beach Park to gather the dry wood and any combustible material needed for the Holika pyre. Some old furniture was also collected. Few of them made a hurried trip to Little India to get Sweets and Namkeen packets to be distributed after Puja.

The preparation started a couple of hours before Puja near the garbage disposal area-the designated place for the event. Aptly so, as the Puja pyre generates a copious amount of fire, smoke, and heat. “This is Singapore Lah…safety first Lah “… Lah…A Singlish term extensively used at the end of sentence….much like how we use “yaar.” 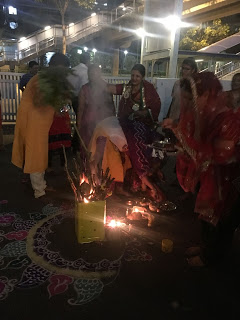 Unlike in India, where the size of the Holika showcases the strength and power of that group; Here, a small Holika was arranged and decorated with beautiful colouful Rangoli. It is the spirit and emotion that are important rather than the scale of the celebration.

With such beautiful memories of 2013 Holi, I got into the cab to attend 2019 Holi at WWC. I was filled with strange excitement as I met many of them after a gap of four long years. I wondered if the celebrations would have undergone some kind of makeover. Will it be the same as earlier? And so many other apprehensive thoughts.

All my apprehensions melted away in all the greetings, hugs, and love of my Friends from WWF. It seemed like good old times…We just picked up from where we left. Except for the fact that the WWF has expanded 10 fold, and all the kiddos have grown big and tall.

The celebration had the same verve and vivacity. We all participated in a small Puja and Parikrama of the Holika in the bright but soothing moonlight of Phalaguna Poornima. And as the Holika pyre was lit and set on fire, signifying the victory of good over evil, we prayed to Lord Vishnu for everyone’s well-being. Within seconds the flames leaped into the air illuminating the whole area, purifying and cleansing the atmosphere as we played Shagun ki Holi to express our joy at the end of evil Holika and also to welcome spring.

The celebrations concluded with the distribution of Badam Milk, Mithai, and the works. And I returned home with a heart full of love, joy, and happiness to be cherished for a lifetime.